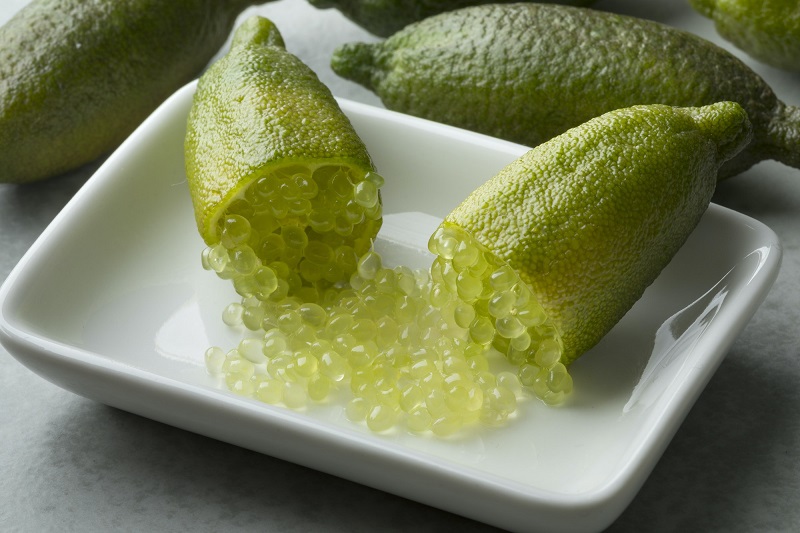 The “finger lime” has a resemblance to fingers and caviar, but the reality is that it is a citrus fruit with antioxidant functions. Do you want to know more?

The finger lime or citrus caviar is known to science as Microcitrus australasica, a fruit belonging to citrus that is shaped like a finger. Its crystalline pulp resembles small pearls and hence its resemblance to traditional caviar. Although in this case, it does not grow in the sea, but on trees.

It is considered a gourmet ingredient in modern cuisine. When fresh there is a burst of flavor that mixes between lime, lemon, and grapefruit. However, it is less acidic and more refreshing. Therefore, it is not lacking in summer recipes.

Finger lime is a gift from nature that, in addition to its sensory characteristics, provides several health benefits. In this article, we will tell you about them.

What is “finger lime”?

Australia has 6 species of native citrus, but the best known is the finger lime, being native to the tropical forests located in the coastal border regions of Queensland and New South Wales. The tree is given the scientific name Microcitrus australasica.

It can measure between 3 and 10 meters in height. It grows slowly, being able to bear fruit between 5 and 17 years after being planted.

As for the characteristics of the fruit, it is cylindrical and comes in various colors, such as pink, yellow, orange and green. It is comparable in size to a pickle and its shape is reminiscent of the index finger.

The pulp consists of hundreds of tiny, crunchy, translucent, spherical pungent juice vesicles, the first impression of which is reminiscent of caviar eggs. Hence they refer to it as citrus caviar, vegan caviar, or citrus pearls.

The nutritional value of finger lime is somewhat similar to that of other citrus fruits, except that it may have higher values ​​in certain vitamins. Below we refer to the content in grams (g) per 100 grams of fruit (vitamins and minerals are expressed in milligrams):

Calorie and moisture content is similar to oranges, lemon, grapefruit, and tangerine. In addition, its fiber value is high, so these three components make it ideal for use in diets to lose weight.

The value of carbohydrates is half of what the rest of the citrus fruits provide, with simple sugars predominating, such as glucose, fructose, and sucrose. On the contrary, it has more than twice the vitamin C of other fruits.

Magnesium and zinc stand out as their main minerals. Some scientists have shown that this citrus fruit contains high levels of antioxidants. However, its action as a free radical scavenger is less than that of wild linden, plum, or lemon myrtle.

The main components are caffeic and vanillin phenols. The shell provides a lot of volatiles that give a characteristic and bitter taste. Among them, limonene, sabinene, citronellal, alpha and beta-pinene, and citral stand out, among others. 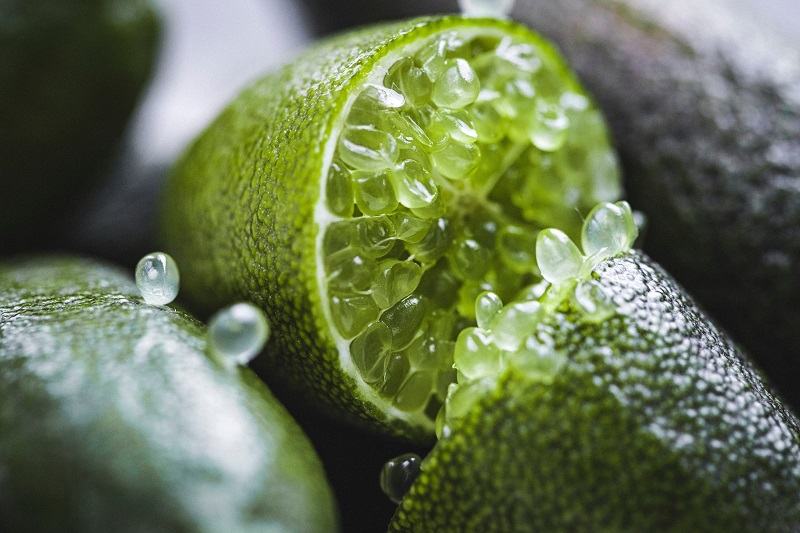 The main benefits of finger lime have to do with its nutritional contribution and with the bioactive compounds that are part of its pulp and peel. Let’s see it in detail.

Works as an antioxidant

The high presence of vitamin C in citrus caviar allows it to act as an antioxidant that helps boost the immune system. This vitamin favors the activity of neutrophils, monocytes, lymphocytes, and killer cells.

Likewise, it can help maintain the cellular integrity of the skin, since ascorbic acid defends against aging. It also intervenes in the formation of collagen, in healing, and in the recovery of burns.

On the other hand, studies have shown that vitamin C decreases the formation of thrombi, facilitates the absorption of dietary iron, fights bacterial and viral diseases, and prevents the oxidation of lipids.

The presence of phenolic compounds in the peel and juice of the finger lime also contributes to the antioxidant action. It is for this reason that the fruit can be used as a base in the preparation of certain cosmetics.

The wide variety of colors of citrus caviar is due to the presence of beta-carotene, which is capable of being transformed in the body into vitamin A. This vitamin is capable of preventing blindness and strengthening night vision.

In addition, vitamin A softens and moisturizes the skin, prevents respiratory infections, helps produce sex hormones, and is involved in the growth and development of bones.

Add potassium to the diet

The potassium value of finger lime is as high as that of other fruits. A 100-gram serving provides 250 milligrams of the mineral, contributing to heart function and muscle contraction. In addition, the European Food Safety Authority states that potassium contributes to normal neurological function and blood pressure control.

The high proportion of fiber in this citrus fruit helps improve digestive function since the cellulose and hemicellulose prevent constipation. In addition, soluble fiber, such as pectin, improves digestion and the absorption of nutrients. When consumed, it causes satiety and prevents hunger in diets to lose weight.

Uses of citrus caviar in the kitchen

Before using finger lime in the kitchen, some precautions must be taken to guarantee the sensory characteristics of the fruit. Thus, the preparation will acquire all its culinary benefits.

When the vesicles of citrus caviar are used, certain precautions must be taken. For example, the ends of the fruit should be removed, and then, with the same knife, carefully cut the skin on four sides lengthwise.

It should be avoided that, when opening the fruit, the oil from the shell comes into contact with the caviar, as it will affect the taste. The vesicles are then carefully removed with a teaspoon or thumbs, placing them in a bowl, before removing the seeds.

It is recommended to keep the whole fruit at no less than 5 degrees Celsius, in a refrigerator. This way it will last between 2 to 3 weeks without modifying its characteristics.

The tiny pearls of this citrus fruit can be used as a flavoring or coloring agent, as a garnish on appetizers, soups, meats, and cream cheese. It is also used as vegan caviar on top of smoked salmon, with a sour cream dressing.

They can be mixed cold for desserts, such as mousses and soufflés. They are added to dressings for vegetable and fruit salads, sauces, and drinks.

Its juice is extracted like that of any other lime. When mixed into preparations it gives a burst of flavor. It is used in carbonated drinks, such as mineral water or lemonade.

Several Australian chefs use them in guacamole, in dried fruit roll-ups, as well as in ceviche with local fish and limes. Also, it goes very well with bivalve shellfish, such as oysters and clams.

They can be added to cocktails, champagne, and even sushi. They are also used as a garnish and as a substitute for lemon wedges on steamed, grilled, or fried fish, lobster, or scallops.